So the Danish weather has been AHHHH-mazing the past days, and what better way to enjoy the weather than to eat ice cream?! So here’s a fun little project using a library called jQuery UI (which apparently is a very popular library, however a bit old as I understand it).

Create your own ice cream here! 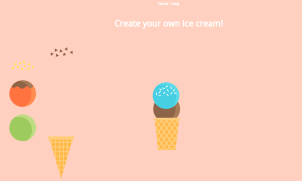